I made a mistake. A big one.

One of the most exciting things about the Lefkoe Belief Process (LBP) is that it not only has a very practical aspect to it (it eliminates the beliefs that determine most of our behavior and emotions), it also has a powerful spiritual aspect (it enables people to enter a profound altered state of consciousness). 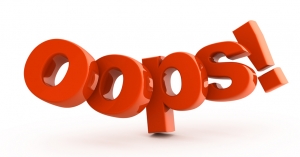 People are guided to enter that state after realizing that they can’t be their beliefs—and the behavior and emotions that manifest from those beliefs—because they’ve just eliminated one or more beliefs that they’ve used to define themselves (for example, I am not good enough) and they are still here.

We are ultimately universal consciousness

The part of the LBP that facilitates the altered state of consciousness (the Who Am I Really? Process) also suggests that if people aren’t the sum total of their beliefs (namely, a “creation”), who they really are is universal consciousness, energy, God, etc. That part still seems true.

But another aspect of the WAIR? Process suggests that the consciousness that we really are creates the beliefs. As a result I used the term “the creator” to describe who we really are.

On that count, I have been wrong for over 25 years. Totally wrong. I still think that who we ultimately are is universal consciousness, but that consciousness doesn’t create our beliefs; each individual creation does.

Where our beliefs come from

As I pointed out in a recent blog post, for many years it had seemed to me as if we didn’t form a belief until an event had been repeated many times.

Then I had an insight last week: It isn’t that nothing happens in our minds as a child when events happen until there is a critical mass, we are actually giving meaning to each event.  … when we ascribe meaning to an event that meaning applies ONLY to that specific event.  Now what I think happens is that after giving a similar meaning to similar events over and over, at some point we generalize and form a belief.

So not living up to mom and dad’s expectations and having them get annoyed or angry might occur to us as we screwed up, we did something wrong, we failed at doing what they wanted, etc.  At some point we unconsciously ask ourselves what all these occurrings mean and we might generalize the occurrings and conclude: Mistakes and failure are bad, I’m not good enough, or there’s something wrong with me.

What causes the meaning we give events as a child?

You might ask:  Well, if beliefs are the major source of our occurrings later in life, what is the source of our initial occurrings as a young child, before we have any beliefs?  Good question!

I’ve made the point repeatedly that events have no inherent meaning, that all meaning is in our minds, never in the world.  That is true.  But—and this is a very important “but”—events can seem to have inherent meaning for young children.

We have a sense as children that parents, being adults, know how the world works and we don’t.  That’s why kids are always saying: When I grow up, then I’ll be able to ….  So if my parents are annoyed or angry with me, they must know what they are doing, they must have a good reason to be angry, and I must have done something wrong.

Children up to the age of about seven are in a stage of development Piaget called “preoperational,” meaning they are unable to reason or take another’s point of view.  They are totally egocentric and narcissistic and think that that they are somehow magically responsible for everything that happens.

As a result, children are unable to even ask the questions:  What if mom and dad have terrible parenting skills, which is the cause of their anger toward me?  What if their annoyance is the result of their beliefs and is not really related to my behavior at all.  As a child it would never occur for us to think: Maybe they think I did something bad, but they are wrong.

My students helped me realize my mistake

Thanks for reading my blog. Please post your questions or comments on the WAIR? Process and “who” actually creates our beliefs. Disagreement is as welcome as agreement. Your comments add value for thousands of readers. I love to read them all and I will respond to as many as I can.