Does it really make a difference what we choose?

During a session last week, a client was trying to decide between two alternative paths for her career. She listed the pros and cons of each and tried to decide which one would be the best choice. I recognized that the principles I wrote about in last week’s post about our obsession with results was relevant to her thinking. 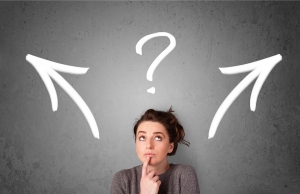 I realized something else: There was no way to know for sure which choice would turn out to be the best and there was a very good chance that her second choice, if that’s the one that she ended up being forced to take, might well produce better results for her life in the long run than her fist choice.

I also realized that there was a principle here that I had not covered in last week’s post: Because we can never know the future for sure, and there is always a good chance that our second choice will produce as good if not even better results in the long run than our first choice. Therefore, we should stop being so concerned about getting exactly what we want.

Is our first choice always the best one?

In other words, decide what choice makes the most sense given all your knowledge at the time, and then go for it. But don’t make a big deal about whether or not you achieve your first choice, as you never know for sure that it was the “right” choice and you probably have almost as good a chance of the second choice turning out as well or better.

What difference will doing this make in your life? You will eliminate a lot of the disappointment, the upset, the frustration—in short, all the negative feelings and stress—that comes from failing to achieve what you set out to achieve.

Let me give you a couple of examples to make this real.

Brittany wanted to go to Brown

My daughter, Brittany, had her heart set on going to Brown when she graduated high school. She had visited the school, talked to kids who were attending, sat in on a few classes, read the catalog, and seen the campus. As a result she had decided this was THE college for her. It was ranked #14 in National Universities by U.S. News and World Report.

She applied while still in high school and was not accepted (they accept about 8.5% of all applicants) and, as you might expect, she was very disappointed.

Brittany also had applied to several smaller colleges, was accepted by Beloit, and off she went in September. She was not happy there for a number of reasons and applied again to Brown as a transfer student. Once more she was not accepted and again she was very disappointed about not getting what she wanted.

She was so unhappy at Beloit that she tried yet again to transfer, this time in the middle of her sophomore year. This time she tried several different schools, including Washington University in St. Louis, which is ranked #15, only one spot below Brown. She was accepted to several schools including Wash U., which she chose, and she moved to St. Louis in January.

She loved the school, made Dean’s List every semester she was there and was National Scholar-Athlete of the Year her senior year. It turned out to be the perfect school for her: small classes, really smart kids who provided interesting discussions in those classes, great teachers, challenging courses, etc.

She’ll never know how well she would have fit into Brown, her first choice; she does know that she was thrilled to have ended up at Wash U., a school that was a distant second to Brown.

Is a promotion always the best outcome?

Carlos, one of my clients, had been telling me for months how he had been doing everything he could to get promoted to a managerial job he had been wanted for years. One day he started his session with me by exclaiming: “It’s not fair. I deserved that promotion. And they gave it to someone else. I didn’t get it.”

He was upset that he had not gotten the promotion he had worked for so hard, for so long. I helped him distinguish between the event (not getting the promotion) and the meanings he was giving it (it’s not fair; I’ll never get the promotion), so that the meaning dissolved. That stopped the upset.

But he still had not achieved what he wanted to achieve: a managerial job in the company where he worked.

He finally concluded that he probably wouldn’t get the position he wanted at his current company, so despite the fact he loved his co-workers and general working conditions, he quit and found the type of managerial position he wanted in another company. Several months after he took the job he sent me an email describing how happy he was in his new job and how the long-range opportunities were greater than they would have been at his old company.

He didn’t get his first choice. He had to settle for what looked like a poor alternative at the time.

Was his first choice (a management position at his original company) better than his second choice (leaving a company he liked to get a management position at another company)? There is no way to know for sure. But his second choice worked. And more often than it, it usually will. And because your second (and often even your third) choice usually works out, does it make sense to work yourself into a frenzy when your first choice doesn’t work out?

Thanks for reading my blog. Please share your thoughts about our need to achieve our first choice and our initial disappointment with having to accept a second choice.

Disagreement is as welcome as agreement. Your comments add value for thousands of readers. I love to read them all and I will respond to as many as I can.