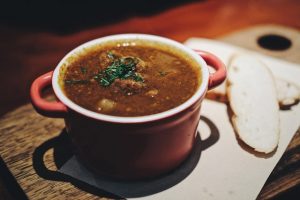 Tamara puts a bean stew into the oven on Friday.  Then before the sun goes down, she turns off the oven and leaves the stew inside.  Hundreds of other women in her village in Lithuania do the same.  Like them, Tamara leaves the stew in the oven until later on Saturday when she takes it out and serves it to the family.

Whenever we see a pattern of behavior, there is always something driving it
The desire to serve a hot meal on the Sabbath drove Tamara to devise a way to have hot food prepared without having to cook food on the Sabbath.  Similarly, fear of failure is also driven.  It doesn’t come out of nowhere.

Meanings in the mind cause fear of failure
For example, my student Jessica was putting off posting to a forum to request people to interview.  This is something she needed to do to market her business.

These are the meanings that are holding you back
For example, Phil had been invited to put on a webinar for his mentor’s email list.  Six months later he still had not done that.

Once the meaning was dissolved there was nothing keeping him from taking action
Keep in mind behavior always has a driver, like Tamara turning off the oven and leaving the food inside until the next day.

But what do you do once, you find them?
You dissolve the meanings using the Lefkoe Freedom Process.  You can learn how to dissolve meaning using the tutorial found here.

To sum up:
Meaning drives us to fear of failure

Life brings us all big and small storms that can keep us from experiencing total joy. Wouldn’t it be great if we could somehow be a bit more like the eye of the hurricane, unaffected by the chaos around us?

Fortunately, my husband Morty created a way to do just that called the Lefkoe Occurring Course. In that course, you learn how to dissolve unwanted emotions in seconds. Then you make dissolving emotions a habit. You see reality with much greater clarity. As a result, positive and uplifting emotions tend to occur naturally.

You can register for the Lefkoe Occurring Course in July. However, to do that, you first need to join the waiting list here: https://www.mortylefkoe.com/lfc/lfc-2-0-waiting-list/

While you wait you’ll get several goodies teaching you more about how to dissolve unwanted feelings. So please join today and use what you learn to help yourself and contribute to others.