Another senseless shooting.  Another hate crime that will impact so many 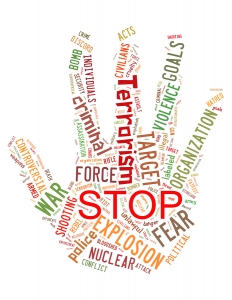 lives forever.  The pain that the family and friends of these young people are experiencing is unfathomable.  I am moved to write this blog in memory of those who were killed or hurt last month in Orlando and to their loved ones.

What will it take for shootings, mass killings, hate crimes and religious wars to stop?

It seems evident that it is people’s’ beliefs that cause them to behave in these destructive ways.  Beliefs like Abortion is wrong and I must do anything stop it, Muslims are bad, Jews are bad, Black people are dangerous, If you’re not in my religion you don’t deserve to be here when the Armageddon comes, My beliefs are the right ones and yours are wrong, We’re the superior race.

If you believe that a group of people is dangerous it is natural to feel fear when confronted with that group.  If you feel fear, the natural response is to protect yourself.

A Case Study In Ending Hate

Some years ago Morty and I had the good fortune of being asked to appear on the Leeza Show hosted by Leeza Gibbons.  Morty did the Lefkoe Method Belief Process with a skinhead who had the belief Black people are dangerous.

Morty asked him how he formed this belief and the skinhead told Morty that his mom had been mugged by a black man and his dad was a racist who told him that black people were dangerous.

Next, Morty asked, “What’s are other interpretations for the fact that your mother was mugged and your dad said Blacks are dangerous?”

He came up with the following answers:

Morty then asked “So, if there are other valid interpretations of what you experienced with your father and what happened to your mother is what you said Blacks are dangerous the truth or just one interpretation?”

When the belief went away this young man was remorseful about what he had done.  He made it his mission to go to other skinhead organizations and try to get people to stop hating and stop the violence.  It was truly inspiring.  He ended up speaking at schools about hate to make sure the next generation of kids grew up without racist beliefs.

Obviously, given where we are now, getting rid of our beliefs as this young man did is the first step.  Becoming aware of our own prejudices and then finding our beliefs.  For instance, ff you see someone with a turban boarding a plane, or notice someone who dresses differently than you and you think, “they must be trouble” then, you can find the belief about that group of people and unlearn it.

But how can we PREVENT beliefs that cause hatred and Violence?

As parents we can teach children compassion, lovingkindness, to look for the best in others, to see people as people.

When I was a little girl my mother told me that people have different color hair, different color eyes, and different color skin.  And further, if you pulled down someone’s skin we’re all the same underneath.  We all have bones, tissue, blood and they all looked the same.  I, therefore, grew up without any beliefs about the color of one’s skin having meaning.  I either liked people or didn’t but it had nothing do with what color, religion, or nationality they were.

Maybe we can all teach our children to accept differences and not judge like my mother taught me. Maybe we can teach our children to put themselves in other people’s shoes.  Maybe when someone does something hateful we can think “what must have happened to that person that made them that way?”  It isn’t that you tolerate “bad behavior” but you can come from compassion when you ask for it to stop.

Is It That Simple?

Imagine there’s no countries
It isn’t hard to do
Nothing to kill or die for
And no religion too
Imagine all the people living life in peace,
You may say I’m a dreamer
But I’m not the only one
I hope some day you’ll join us
And the world will be as one

It may not be that simple to stop having countries or to stop seeing people’s skin color, but in order to have real peace, we must stop giving these differences meaning.  In other words, we don’t know anything for sure because someone is a certain color, or follows a particular religion or because of who they love.

Beth was raised in a sect of Fundamentalist Christians.  She grew up believing that what the church taught was the right and only way.  As she grew in her spiritual journey it became apparent to her that her beliefs were not the right ones.  They were just hers.  She also was becoming increasingly uncomfortable with the fact that judging and making others wrong was not really consistent with her values of being a Christian and that’s what a lot of churches were teaching.  She said she would only go to Churches that didn’t do that.

One day Beth and I were walking down the street of Big Bear, California and we were having a conversation about religion.  She shared with me that her belief was that people shouldn’t have sex before marriage.  She went on to say that if her daughter believed differently, she would be fine with that.  She didn’t believe in abortion but if her daughter had one she would love her unconditionally and not judge her for it. She also believed that Jesus would love her daughter and not judge her either.  I actually broke down in tears.   I thought, if everyone in the world were like my friend, this world would work.

So how can we use these ideas to make a better, safer, more loving world for our children to grow up in?  Let’s start by ridding ourselves of any beliefs that might perpetuate hate?  Then let’s raise children to not judge others based on differences.

“If we could change ourselves, the tendencies in the world would also change. As a man changes his own nature, so does the attitude of the world change towards him. … We need not wait to see what others do.”

Let’s stop these senseless acts of violence.  Let’s try to create a world where love and compassion are the answers and not hate and violence.  If not us, then who.

It is beyond words to says how well this program works and how magnificent Shelly Lefkoe is as a facilitator.

We’ve worked together several times, but the changes from last week’s session are astounding to me.

First we worked on “I’m not capable.”
Guess what I did this week?
I wrote 2 very important, “legalize” letters all by myself, and sent them!
NEVER would I have done that before getting rid of the belief “I’m not capable.”

Not only that, here I am sharing this testimonial for all the world to see me.

I’m astounded at my own changes!!!