Re-post: How to identify the meanings that cause you to procrastinate (without excessive navel-gazing)

When you turn on an incandescent light bulb, what is happening? 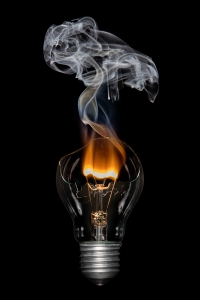 Working against resistance is how a light bulb produces light and heat. In people resistance can also produce procrastination.

Electricity flows into a very thin wire in the bulb called a filament.  That wire is thin on purpose.  It’s thin so that the electricity will have a harder time going through it. When the electrons have to work harder to go through a material we say that material has greater resistance to electricity.  And a light bulb filament needs resistance in order to get hot so that it can produce heat and light.

Similarly, if you’ve ever put off doing a task, then you have experienced a different kind of resistance. The resistance to taking a particular action.  If we give into this resistance by putting off a task, then we call this procrastination.

But what is procrastination exactly?

The best definition I know of comes from a psychologist named Dr. Timothy Pychl.  He says that procrastination is putting off a task until later knowing that you will be worse off for doing so.  So taking a break to rest and relax so you can put more energy into your next task wouldn’t be considered procrastination since that helps you get things done.  But putting off your taxes until the last minute knowing you won’t get as many deductions due to rushing would be procrastination.

Why?  One reason is knowing the meaning that makes us put something off can keep us from failing to meet our intentions over and over again.  This kind of repeated failure tends to make us less confident that we’ll follow through next time.  And eventually, we can even give up trying.  Second, once you know the meanings that keep you from taking action, you can then dissolve them with the Lefkoe Freedom Process so you can do what you intended to do all along.

So how do you find the meanings that cause you to procrastinate?

First, think about a task you are feeling uncomfortable about.

Second, notice the feelings that show up … then the thoughts.

Third, look for thoughts or meanings that judge or evaluate yourself, the task, or anyone who may have given you the task.

Once you’ve done that, you’ll have discovered the meanings that keep you from doing that specific task.  To make this more real, here’s an example:

One student in the Lefkoe Freedom Course had a large room to clean, here’s how he discovered the meanings holding him back.

He then dissolved the meanings he found in step three using the Lefkoe Freedom Process and was able to take on the task in small bites.

But why use the Lefkoe Freedom Process when eliminating beliefs should handle procrastination?

In the ideal world, we’d all just eliminate every belief in our way anytime we find ourselves not doing what is best for us.  I would love it if I could teach everyone how to find their limiting beliefs and then, of course, to eliminate them.  And we have courses such as the LMT1: Eliminating Beliefs and LMT2: Finding beliefs that do teach you how to do that.  Combined they take a few months to complete.

Those programs are ideal for people who want to learn how to help others eliminate their beliefs.

The other option is to work with a Certified Lefkoe Method Facilitator.  Our CLMF’s can help you find and eliminate the beliefs causing most procrastination problems.  However, if you want to help yourself right now, learning how to identify meanings and dissolve them is a great option.  Dissolving meaning is something that you can get started on right away and see results right away too.  For those who procrastinate, they often need near-instant results to stay engaged with a process and the Lefkoe Freedom Process gives those kinds of quick results.

So when you run into resistance, don’t just push yourself or force yourself

You can end up burning out like the filament in an old light bulb.  Instead, discover the meaning in your way and dissolve it using the Lefkoe Freedom Process.  This way you can take action and get a lot more enjoyment out of what you do.

Procrastination is putting something off knowing that you will be worse off for doing so.

It’s important to discover the meanings that lead to procrastination so you can dissolve them and take action.

You can find the meanings that lead to procrastination with these three steps:

You learned how to identify meanings that cause you to procrastinate, but how do you dissolve them?  I show you how to do that when you join the waiting list for the Lefkoe Freedom Course which will open for registration in July 2020.  Just enter your name and email below and you’ll be sent several goodies that teach you the basic principles of dissolving meaning.