How To Keep Your New Year’s Resolutions

Did you keep your New Year’s resolutions last year?  … What about the year before? …

If you are like most people, you worked on them through the middle of January and by early February you had forgotten you ever made them.  Or, perhaps after several years of failure, you stopped making New Year’s resolutions at all. 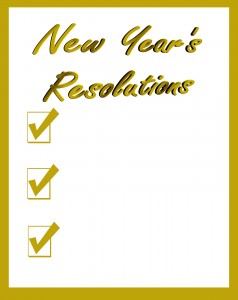 Let me give you a few examples.

A few years ago I had a client named Johnny whose problem was that he procrastinated a lot of the time.  He almost always let work projects go until the last minute. As a result, he was anxious much of the time and sometimes he would turn projects in late, which resulted in an upset boss.

At some point he decided he must change, so he made a New Year’s resolution to stop procrastinating the next year.  Because he was really committed, he did everything he could to insure his success.

And yet—despite this detailed strategy for keeping his resolution—by early February he told me the problem was as bad as ever.

I asked Johnny what thoughts and feelings he had when he was about to do what he knew he should do at work, just before he put it off and did something else instead.  He gave me the following list.  (Notice that the first two are his occurrings, the meaning he gave to having a project to complete.)

After a short discussion we found a number of beliefs that were causing the thoughts and feelings, including these three:

These beliefs (and several others) led to the thoughts and feelings that caused Johnny’s procrastination.  After I helped him get rid of the beliefs, the procrastination stopped … totally.

If you resolve to stop procrastination, eliminate all of the relevant beliefs and your New Year’s resolution will finally manifest.

I’m going to find a great relationship this year

Here’s another story that will explain why it can be so difficult to stick with our New Year’s resolutions.

Years ago I had a friend, Jennifer, who really wanted a great romantic relationship.  In fact, it was all she could talk about.  But she either went months at a time without any relationship at all, or she would get into disastrous relationships that didn’t last more than a couple of months and then ended with a lot of upset.

One year she made a New Year’s resolution to create a great guy in the coming year.  She made a list of all the qualities she wanted, visualized what he looked like, and imagined spending time with him as he did all the things she imagined this great guy would do.

But after February came and went she asked if I would put on my professional hat and help her.  We quickly identified the following beliefs, among others: I’m not good enough.  I’m not lovable.  I’m not deserving. Men can’t be trusted.  Men are jerks. Relationships don’t work.  I’ll never get what I want.

What were the chances of a nurturing long-term romantic relationship with beliefs like these? … Slim to nil.  So I helped her eliminate these and a few other beliefs and conditionings.

By June she was in the relationship of her dreams and by the end of the year she was married.  (Obviously, not everyone who eliminates the beliefs that act as barriers to getting what they want will automatically get what they want if they eliminate those beliefs.)

With about 70% of American adults obese or overweight, the resolution to lose weight is probably a common one.

Unfortunately, the reason people have a difficult time losing weight is the same reason they overeat and gained the weight in the first place.

As I explain in detail in my eBook, The Secret to Ending Overeating For Good, (http://emotionaleatingreport.com) overeating—in other words, eating when you aren’t hungry—is caused both by conditioning and beliefs.  And most people’s weight problem is the result of overeating.  In other words, if you only ate when you were truly hungry—and not for emotional reasons—and you ate healthy food with a modicum of exercise, you would not gain weight.

Overeaters have conditioned eating as the “drug of choice” whenever certain emotional “triggers” occur, such as feeling lonely, bored, anxious, feeling unlovable, depressed, stressed, or rejected.

Many also have beliefs like: If I don’t eat the food in front of me now, there won’t be any later. If I can’t eat “bad” foods, I’m missing out. The way to keep food from running my life (like it did my mom’s) is to eat whatever I want to eat.

What are the possibilities of keeping your resolution to lose weight if you have conditionings and beliefs like these?  Again, not too good.  On the other hand, if you get rid of all the relevant beliefs and conditionings, your overeating will stop naturally and automatically, and losing weight will be relatively easy.

Next year is the year you can achieve all your resolutions

As you make your list of what you resolve to do next year, take a look and see if you have any beliefs or conditionings that might be barriers to achieving any of your goals.  If so, get rid of them and then notice that, perhaps for the first time, you keep your New Year’s resolutions and you achieve all that you want.

Happy Holidays!  May you continue to dissolve the barriers to your “creation’s” happiness and well being and may you continue to experience yourself as the “creator” you actually are—with nothing missing and anything possible.

Let’s have this coming year be the year you make all your dreams come true.

Thanks for reading my blog.  Please share below your thoughts and questions on keeping your New Year‘s resolutions.  Your comments will add value for thousands of readers.  I read them all and respond to as many as I can.

If you haven’t yet eliminated at least one of your limiting self-esteem beliefs using the Lefkoe Belief Process, go to http://www.recreateyourlife.com where you can eliminate one limiting belief free.

Use this information to improve your life