Why some get grumpy as they age … and a solution

I have often wondered why people get grumpy as they age and, more importantly, how to help those who have become grumpy regain their happiness. I found the answer to both questions and I’ll share them with you today. 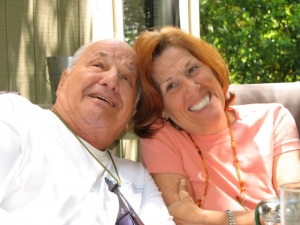 Shelly and her father

Here’s how I began my search.

The Grumpiness Of My Dad And His Buddies

Before my parents passed away, I used to go to Florida to visit them. I always enjoyed seeing my dad who was a very loving man for most of my life.

As he got older, I noticed that my dad was getting grumpier and grumpier.

What do I mean by “grumpy”?

By grumpy I mean quick to anger, seeing things negatively and fighting over little things.

It occurred to me that he was not the only person who was getting grumpy as he aged. Many  people in my parents’ senior complex were grumpy as well.  For example, my father and “the boys” as my mom called his friends, (all of whom were over 80) would go out for breakfast every morning.

One morning I was sitting by the pool and Manny said, “Let’s go to TooJay’s for breakfast.”

And my dad said “No it’s three-quarters of a mile. You don’t know what you’re talking about.”

And the fight began.  Yes, it was really an argument about a ¼ of a mile.

He also was grumpy about other things.

He fought with my mother over whether a glass should be on the table or not.

He argued with my brother and I about whether My Big Fat Greek Restaurant was too far for dinner or not.

He yelled about how much food my mother bought.

Why did he and others his age behave this way?

A client gives me an insight

About a week after I returned home from Florida I was working with a client named Gary. He shared that he felt like he had suddenly lost his identity after retiring recently.  Wow! I had a real insight into why some older people become grumpy.

Later, he might get praised for getting A’s in school and form the belief “What makes me good enough is achieving.”

So as long as he was achieving, he felt important, but when Gary retired and was not achieving in as many tangible ways as he had before, his survival strategy stopped working.  As a result, he felt anxious and less than everyone around him. He didn’t feel like part of the group. He felt very much alone.

Why Survival Strategy Beliefs Can Stop “Working” As We Age

Survival strategy beliefs often stop working as we age because our circumstances change. You might retire and lose the validation you got from your job. You may not be as strong as you used to be and so can’t throw a ball as far or run as fast. Or you just may not have the energy to work until 8 pm at night like you had in the past.

For example, Steve, a client of mine believed that what made him good enough was being the best. He was the best tennis player in his league for a very long time. Younger kids were coming into the league and suddenly he was no longer the best. As a result, he started to feel like he wasn’t good enough.

Something he hadn’t felt for many years.

When your survival strategies are away, the bad feelings will play.

So what can you do?

How To Age Gracefully – A Beautiful Example

A woman named Fanny was often at the pool in my parent’s retirement home and I noticed she had more joy about her than the other older women.  She laughed a lot and always had a joke for us.  She especially loved to make fun of the “condo rules” that everyone was so attached to and about which many of the other residents complained.

I asked Fanny how she could be so happy all the time.

She told me that she had aches, pains, and unwanted experiences just like her older friends. The difference is that she was determined to not be miserable. Instead of complaining and thinking about her pains, she volunteered her time as a teacher’s aid.

She helped kids do their lessons and gave them hugs when they were upset.  She also read to the blind.  She found that showing compassion to others gave her joy. It’s difficult to be grumpy when you’re contributing.

The Lefkoe Way To Age Gracefully

Another way to age gracefully (as well as be more joyful in life at any age) is to get rid of core beliefs such as the following:

And any believe that says you have to do something to be OK such as:

What makes me important are my achievements

What makes me good enough is doing things perfectly

In addition to being less angry and  having more joy in your life, getting rid of these beliefs helps you to foster healthier relationships with friends, family, and even condo members.

You will no longer have anything to prove. You can just be yourself. Your inadequacy button won’t be there, so it can’t get pushed.

Remember, you are a human being and not a human doing. Your value is intrinsic and does not have to be earned.

If you should meet “grumpy old men (or women),” and you probably will, you can have compassion for them … because now you know that they have beliefs causing their “grumpy” behavior.

And if you cannot follow this advice …
You can always get rid of the beliefs that are causing these problems … and lucky for you, you know just the person that can help :)