For most of my life I didn’t see bragging as a problem. I did it and most of the people I knew did it also. It was just something that people did.

It wasn’t until I developed The Lefkoe Method 30 years ago that I realized that bragging is actually a way to compensate for a low level of self-esteem. 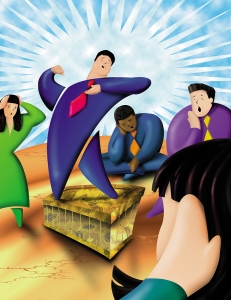 As I’ve written in the past, very few people escape childhood without forming a bunch of negative self-esteem beliefs, because most parents aren’t aware that their behavior is the major source of the beliefs their children are forming.

Specifically, parents usually want their children to do things that they are developmentally incapable of doing. They want their young children to act like little adults, which they cannot possibly do.

For example, parents, being adults, generally like quiet; children are not quiet and cannot even understand why anyone would value quiet. Parents for the most part want their house to be neat; young children don’t even understand the concept of “neat.” Parents want to sit down for dinner when it is ready and before it gets cold or have their children get into the car when the parents are ready to leave the house; children are almost always doing something that is far more important to them and don’t want to stop doing it when their parents call them.

The question is not, Do children frequently “disobey” their parents? Children are developmentally incapable to living up to most parents’ expectations. The real question is how parents react when their children are not doing what the parents want them to do.

Because few parents go to parenting school and most bring their own beliefs from their childhoods with them, their reactions range from annoyance and frustration to anger and abuse, with every possibility in between. So we form negative beliefs about ourselves.

Our need to feel good about ourselves

They are formed early in life when we accidently do something and get a positive response from parents or some other person who is important to us. That positive response makes us feel good about ourselves. After a few repetitions, we form a belief about that behavior: What makes me good enough and important is … being successful, or doing things for people, or my accomplishments, or having people think well of me.

is the most common survival strategy belief we’ve seen after working with over 14,000 clients in the past 30 years. As a result of holding this belief we do and say whatever we think will accomplish that goal. And, usually, convincing people that we are important, we know important people, and have done important things is the best way to get people to think well of us. That’s why bragging is so common.

How my bragging stopped

As a child I always bragged about things that I thought would impress others. How good my grades were. Things I knew. Popular kids I hung out with. Having people think well of me was so important that I even lied just to impress others.

When I was 17 I was living in Miami Beach in a small apartment with my mom. From time to time I dated girls who visited Miami Beach on vacation. One time I remember driving past my aunt’s beautiful house and saying to the girl: “That’s where I live.” I would have been embarrassed to show her an apartment building and say I lived in there. Living in the luxurious waterfront house meant I was “someone special” and that’s how I wanted others to view me.

As I started to help clients eliminate the belief, What makes me good enough and important is having people think well of me, I discovered that I held it also. Eventually I eliminated a lot of negative self-esteem beliefs and several survival strategy beliefs, including this one.

After these beliefs were finally gone, I noticed one day that my bragging had stopped. I knew I was okay the way I was and I no longer need the approval of others to make me feel okay. I preferred that you like me, but your not liking me no longer meant anything about me. So I didn’t have to do or say things to get your approval anymore. A lifetime of bragging had stopped without me even noticing at first.

How to identify bragging

You might ask: Is every comment about one’s accomplishments “bragging”? Not necessarily. Here’s how to tell the difference between someone bragging and merely stating facts: Do they repeat the “facts” of their accomplishments frequently? Does the person talking seem to need you to acknowledge the importance of what they’ve done? Does the speaker have a lot of energy on “the facts”? Does someone’s description of his accomplishments seem to come from out of nowhere and not relevant to the conversation that’s in progress? Is someone telling you about what she’s done an attempt to “one-up” someone else’s description of what they’ve done? If you hear any of these things, you probably are hearing bragging coming from people who need you to think well of them to feel good about themselves.

If the accomplishments are presented as information, as something the speaker is proud of but not “invested in,” and the speaker doesn’t seem to be looking for or needing a positive reaction from you, it probably isn’t bragging.

It’s important to understand that bragging isn’t bad and it isn’t wrong. It’s merely the inevitable result of certain beliefs. When you hear others brag, realize they are just operating out of beliefs that were formed when they were children.

If you brag, and most people do, see if you can relate to the main belief that causes it: What makes me good enough or important is having people think well of me. Get rid of that belief (and the underlying self-esteem beliefs, I’m not good enough and I’m not important) and the need to brag will just disappear.

Thanks for reading my blog. Please post your questions or comments on why people brag, and how to deal with it. Disagreement is as welcome as agreement. Your comments add value for thousands of readers. I love to read them all and I will respond to as many as I can.