Are you really an imposter?

Do you ever question your abilities despite evidence to the contrary?

Do you ever feel that you are a fraud because you think you don’t deserve your success?

If you answered “yes” to any of these questions, you are a victim of the “imposter syndrome.”

What is the “imposter syndrome”? 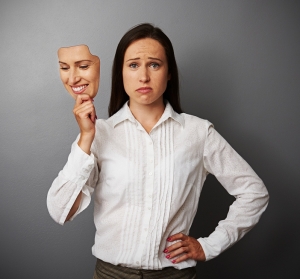 According to Wikipedia, “Despite external evidence of their competence, those with the

[imposter] syndrome remain convinced that they are frauds and do not deserve the success they have achieved.  Proof of success is dismissed as luck, timing, or as a result of deceiving others into thinking they are more intelligent and competent than they believe themselves to be. …

“Psychological research done in the early 1980s estimated that two out of five successful people consider themselves frauds and other studies have found that 70 percent of all people feel like impostors at one time or another.”

Joyce M. Roche, author of the book, The Empress Has No Clothes: Conquering Self-Doubt to Embrace Success, puts it this way: “Impostor syndrome is the fear and self-doubt that causes people to question their abilities—even in the face of success—and to constantly search for external validation. Simply put, it makes it difficult to recognize and celebrate one’s strengths and accomplishments.”

Far too many people are plagued with this problem and are unable to enjoy what they have achieved.  Many of the people who are envied for their achievements do not feel as good as most people assume they do.  In fact they constantly worry that people will find out they don’t really deserve their success and it will be taken away from them.

One source of the problem

One belief that could explain the doubts experienced by successful people is I’m a fake, a fraud and a phony.  Sometimes this belief is formed in childhood when parents or other significant adults acknowledge you frequently for things when you don’t think you deserve the praise.  An example could be parents who say: “This is a beautiful picture you drew,” when you don’t think it is beautiful at all.  Or: “You are such a good boy,” when you know you did things that would make them angry if they knew.

This belief can also be formed as an adult after you have become successful if you have a number of negative self-esteem beliefs and feel you couldn’t possible deserve your success given your negative opinion of yourself.

Another belief that could cause the imposter syndrome is I’m not deserving.  This belief is almost always formed in childhood when parents say:  “You don’t deserve to have [something you want] because you didn’t do what you were told.”  Or: “You should be ashamed of yourself.”  Or: “Your sister deserves the present because she was good and you weren’t.”  You then conclude: “If I’m bad or if I did something wrong, I don’t deserve to have what I want.  I guess I’m just not deserving.”

Insecurity can either inhibit success or undercut success

Insecurity usually is a function of negative beliefs about yourself, such as I’m not good enough, I’m not important, I’m not capable, I’m not competent, and I’m powerless.  People who succeed and feel they don’t deserve their success often have many of the same negative beliefs.  The difference is that people with the imposter syndrome often will also have the survival strategy belief: What makes me good enough or important is being successful.

What is a survival strategy belief?

Perhaps the most common survival strategy belief is what makes me good enough or important is having people think well of me.  Other common ones include: being successful, taking care of people, and doing things no one else can do.  In fact, if you believe I am not loveable and every time you are sick you get love and attention, you could conclude:  The way to get love is to be ill.

So people could find themselves driven to succeed by their survival strategy belief and then feel that they don’t deserve their success because of their negative beliefs about themselves.

The solution to a general sense of insecurity that prevents success is not to form better survival strategy beliefs.  That might help you achieve some level of success, but it would be a success you couldn’t enjoy because you would feel you don’t deserve it and that it could be taken away from you at any minute.

It should be clear that the solution to the imposter syndrome is to eliminate the beliefs that make you feel you don’t deserve your success.  When you do your anxiety will be gone and you will be able to enjoy your success.

Thanks for reading my blog.  Please post your questions or comments about the imposter syndrome and its cause.  Your comments add value for thousands of readers.  I love to read them all and I will respond to as many as I can.

If you want to help your friends who feel they don’t deserve their success rid themselves of their anxiety, please share this blog post with them by using the buttons located below.

Soon I’ll be releasing three videos on how to dissolve negative feelings in seconds – including the feelings that cause procrastination. To gain access to these videos, click here now.