In his recent best selling book, David and Goliath, Malcolm Gladwell makes the point that often advantages turn out to be disadvantages, and vice versa.  I disagree with Gladwell’s proposition.

“Advantageous” events can’t turn out to be “disadvantageous” and vice versa because events never have an inherent meaning to begin with. 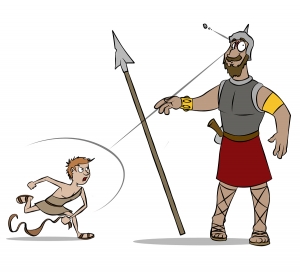 It’s not that what is true turns out not to be true; what we think is true is only a meaning that exists only in our minds; it never was inherently true to begin with.

Why are so many people confused about this issue?

The misconception Gladwell makes in his book is a common one and arises because people think events have inherent meanings.  They don’t.

As I’ve explained in a number of earlier posts, events have no inherent meaning.  But we think they do because we unconsciously and automatically give meaning to most events and then think the meaning is inherent in the event.  As a result we often give an event a meaning that makes it disadvantageous to us.  Then later on something changes and we re-label the original event as advantageous.

In fact, the event was neither disadvantageous to begin with nor did it turn out to be advantageous; both are meanings we ascribe to events; neither are meanings inherent in events.

Is dyslexia really a disadvantage to be overcome?

Gladwell tells stories about people with dyslexia, which is characterized by difficulty with learning to read fluently and with accurate comprehension despite normal intelligence.  He uses dyslexia as an example of something that is inherently disadvantageous to someone, who then rises above his disability to achieve success in some field.  He would claim such a person turned a disadvantage into an advantage.

Why does this matter?  Because many people are unable or even unwilling to turn a “bad” situation into a “good” situation. Once they have become convinced they have a real disadvantage, they live at the effect of it, unable to overcome it.

An alternative way of dealing with seemingly disadvantageous events

To use Gladwell’s example, dyslexia might make it difficult to do well in a conventional school setting, but it doesn’t necessarily make it difficult to be successful in the arts or even creative in a business environment.  So instead of telling a child with dyslexia that if he works hard he can overcome his “problem,” I’d rather tell him that he might have a more difficult time while he is in school, but that he could do very well in the arts, and that he could be a very innovative businessperson.

Do you get the difference? The difference could dramatically affect your what you achieve in life and your daily experience of life.

No matter how hard you look, you will never find meaning in reality.  It is always in your mind.

What’s the lesson here for everyone?

Because no event has an inherent meaning, you should get that the meaning you give any event—whether it’s positive or negative—is never “the truth.”  The meaning exists only in your mind, not “in” the event.

Instead of trying to cope with or deal effectively with something that isn’t really true to begin with, you will always be better off making a clear distinction between the event and the meaning—which will result in the meaning dissolving—thereby allowing you to view the event as it really is: neutral without any meaning.

Then deal with the event as best you can—not thinking you have a disadvantage you have to overcome or an advantage that will make things easier for you.

You will always be better off dealing with reality as it really is than with a meaning that exists only in your mind that you think it reality.

P.S. Over the next three weeks I’ll be releasing three videos on how to dissolve negative feelings in seconds – including the feelings that cause procrastination. To gain access to these videos, click here now.

Thanks for reading my blog.  Please post your questions or comments about Malcolm Gladwell’s book or about the whole notion of overcoming disadvantages. Your comments add value for thousands of readers.  I love to read them all and I will respond to as many as I can.

If you want to help your friends who have been attributing their dissatisfaction with any aspect of their life to their “disadvantages,” please share this blog post with them by using the buttons located below.